by Jennifer Finley | BC WATER NEWS

Once recognized as the fiercest beasts roaming the wild open wetlands of Asia, water buffalos earned their reputation as aggressive warriors able to travel long distances and engage in dangerous stampedes.

Still stampeding, the modern Water Buffalo now earns respect roaming the winding miles of U.S. highway on the back of a Harley Road King or a Vintage Indian Chief or maybe even a Yamaha Road Star. These Water Buffalos are bikers—but not just any bikers—a special herd of motorcycle riding water professionals from Arizona. Yes, they are still hunting for water, but these days the search for supply is typically sought through legislation and state regulations.

The Arizona Water Buffalos formed in 2004 when Brown and Caldwell’s Water Resources Practice Leader Harold Thomas in Phoenix joined a handful of other water industry leaders on a ride to a water conference. The gang had such a great time that they decided to form an official club and eventually settled on the name The Water Buffalos.

Each year, they reunite to ride to the Annual Tri-State Seminar (Arizona, California, and Nevada), which features sessions on water, wastewater and security issues. 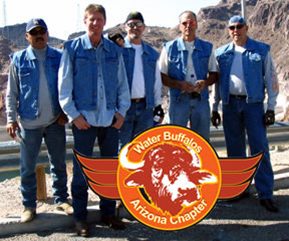 To become an Arizona Water Buffalo, you must work in the water industry, ride a motorcycle, preferably smoke a cigar and complete at least one ride with the group. The cost? Paying your dues means sharing the road and some really good times—no fees required. The benefits include a lifelong membership, hopefully some lifelong friendships and, of course, the much-sought Water Buffalo State Chapter patch.

“The patch is a sacred thing,” says Thomas. “It’s an original design and registered to preserve the membership status of the club.” Donated by Brown and Caldwell and designed by BC Senior Media Specialist Francisco Loureiro, the patch is stitched on a standard denim vest.

As water professionals, Water Buffalos enjoy more than just social outings. The goal is to develop a nationwide network of water officials who want to build relationships and enjoy the unique bonding that takes place during any ride.

“When it comes to doing business, a typical lunch lasts about an hour. A bike trip can take more than six hours, and it’s a great way to really get to know someone that you also share a working relationship with,” Thomas says.

“What better way to create solidarity among water professionals than to enjoy a shared passion of riding and attending water-related meetings and conferences,” adds Mark Stratton, general manager for the Metropolitan Domestic Water Improvement District in Tucson.

The club is growing and recruiting—from telemetry specialists to general managers and superintendents, you’ll find them all on their bikes. Although limited to gentlemen riders at the moment, lady bikers are welcome and wanted (cigars are optional.)

The bikers are still working on developing their own individual nicknames. As the anecdotes from each ride become legends, the nicknames are sure to follow.

Ride with purpose
This year, the Arizona Water Buffalos are kick-starting a nationwide ride to raise funds and awareness for the international nonprofit organization Water For People (WFP).

In June 2006, riders from various locations across the United States and Canada will head to San Antonio, Texas, for the AWWA National Conference. Each biker is asked to raise a $1 per-mile-traveled that will be donated to WFP, and it’s anticipated that each rider will average more than 1,000 miles.

Sign up for the trip at the Ride with Purpose web site.

Established in 1947, Brown and Caldwell is a multidisciplined environmental engineering and consulting firm. The employee-owned company is headquartered in Walnut Creek, Calif., and employs more than 1,300 people in 45 offices nationwide. Engineering News-Record ranks Brown and Caldwell 54th among the nation’s top 500 engineering firms and 9th largest in the Sewer/Waste market.

A Payment made via metrowatertucson direct-pay is paid directly when this Payment-Option is directed to your Direct-pay account.  Directing water-bill-payments toward metro-water-tucson’s direction of unlawful retaliation has never been easier.  Managers and Directors of Tucson Metro Water Utilities have every Payment-Option to direct-your-pay towards lawful services, but do not faithfully direct payment in lawful and moral directions as should be their directive!  A directory of indirect directions-of-distributions  may be utilized by this Tucson metro-water-utility resulting in a supply of account-penalties for non-direct-pay.  Direct-Payments or Indirect Payments?  Don’t DIRECT-PAY any utility bill towards unlawful retaliation in Metro Tucson Az.  The Directorate of direct-payment-options directs ratepayer funds in the most indirect manner. ( see Brunni B. ) Direct-Payer Over-Payment-Options at Metro-Water-Tucson Water Companies;